Just thought that this partnership really does need a mention. First of all lets introduce you to the lads, Carl Common 47, Kristian Lumsdon 25 and Johnathon Patterson 40. All of the lads work full time, apart from Kristian who I must say spends a lot of time looking after him grandparents (well done lad).The lofts are situated in an old mining town called Ashington in Northumberland. This is the same place where the great Jackie Milburn came from (the legendary Newcastle United and England centre forward) and the World Cup winning Bobby and Jackie Charlton (who were nephews of Jackie Milburn) so the place has some history. Not to mention Johnathon Patterson who’s a Frank Lampard lookalike but that’s where it stops, I’ve seen him play football and he’s rubbish! 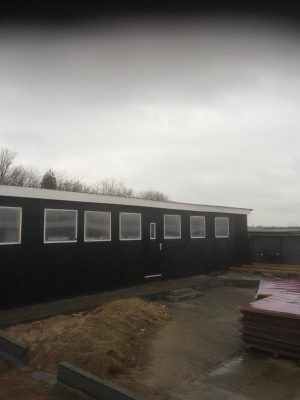 The lofts are on an allotment; the old bird racing loft is 40 foot in length with numerous sections and the young bird loft 36 feet in length with a separate stock loft.The birds are paired over the Christmas holidays as this is when the lads are off work. The race birds are allowed to sit for 10 days then they’re split. It’s at this point when they’re tested and any treatments are given as they don’t like to give medicine when it’s not necessary. John did say he has no issue with the use of antibiotics if they are needed but also said his regular use of good quality supplements has seen a drop in their use.
The birds are also vaccinated at this time for paramyxovirus. I did ask their reason for splitting the birds when they were sitting 10 days and the answer was as follows: most of the race team are young birds from last year, we put them on the dark which forces them to moult the body out, then we race them every week and then the birds finish the young bird program on the light. When their 5th to 6th flight is out they break in the body again and they force the last of the primary flights out. John said he think this gives them that little bit of space to get over their very busy start. I wouldn’t them to rear youngsters which would only pull them down further. They are allowed to rear 1 young bird after racing, as a reward for their effort.The old bird race team consists of approximately 40 hens and 40 cocks. They are raced on the roundabout system, being flashed together but only until the hen starts pulling at the cocks head and neck when down in the nest bowls. But if a pigeon pairs or does something unusual, the lads will use this to their advantage as they are always looking for happy and content pigeons,so anything they can turn into an advantage they will.Old birds are exercised 45 minutes in the morning and evening.
When the birds are working well, this is when the training starts. Here they go up to Darlington (a distance of approximately 50 miles) three times a week depending on the weather and how the pigeons are behaving and are fed on 50% barley 50% diet mix with Bio-Plume Plus and Oligo-Elements on the feed. This is fed from Sunday to Wednesday. Then a basic widowhood corn is given for the last few feeds. Liverchol is given via the water on Tuesday and B-Folic in the water on  Thursday.John has said if the birds are not working on race days,he has no hesitation in taking them down on barley and sometimes quite severely. He puts Lactoban in the water for 2-3 days, then brings them back up as he believes when this is done, the lift pays big dividends especially in inland racing. He also believes that they hold their form much better and for longer. When bringing them back up, he will use Oligo and Bio-Plume Plus on the feed.
Young Birds
he majority of the of the young bird team are bred from the stock pigeons. They breed around 100 young birds to race, most go on the dark but some are kept back on the natural system. This is in case the dark pigeons get a hammering when training and racing, especially when the peregrine falcon is around. The lads experienced this first-hand last young bird season, when they had a peregrine strike from 10 miles away and had 80 young birds out all night.Their young birds are reared on a good quality breeding mix with regular supplementation (Entromune and Levitol) on the feed. All youngbirds are vaccinated on weaning for paramyxovirus. John thinks it’s important to give an electrolyte for a couple of days after vaccination and Medilyte Plus is the preferred product.Young birds are kept on the breeding mix for around 4 weeks and then go onto the 50/50 barley and diet mix. They get their youngsters going as soon as possible, not wanting them to sit on the ground and becoming too fat and in the habit of lying around. As John said, this is a working loft and they’re not show pigeons so they have to race and it’s up to us as racers to give then the best possible chance.When asking about training for the young birds, John said they follow the same regime as the old birds.They have approximately 50 pair of stock birds, some in single breeding compartments and their loft is spotless and a real credit to the lads. I asked what strain of pigeons they raced and they replied that they’ve never been interested in breeds, just good pigeons but did say some are from Deklak,  Marshall and Smith, Shields and Hayley, Nigel Laycock, Soothjens, Mand D Evans, Gabbys plus pigeons from the Gregg brothers and Mccandless of Belfast.I’m not going to bore people with performance stats and prize cards, so I’m only going to to go back to 2016 -2018, and take into consideration the partnership did not race YBS in 2017, I think the following results are outstanding!
ince 2016, the partnership has flown in 66 races, winning 51 club races,21 first federation places, 23 second federation places and 14 times they were both first and second federation which is absolutely OUTSTANDING.They are avid uses of the Pigeon Botanicals range of natural supplements, saying they have really made a significant contribution to their birds health and racing success.